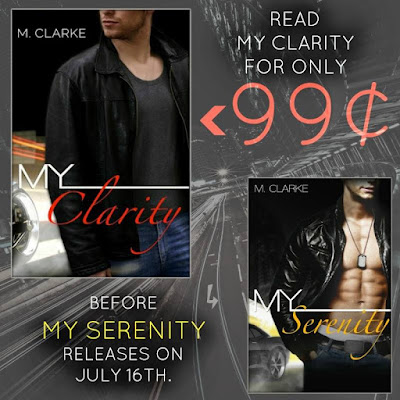 Still reeling from the death of her father, Alexandria hopes to find both independence and reprieve from her grief by heading off to college. However, life throws her a serious curve ball when she discovers that her roommate isn’t quite the person she had imagined.

Smoking, tattoos, and street racing for fast cash are Elijah’s only interests. A harsh life has made him apathetic and indifferent, until Alexandria enters his life. When their paths cross, turmoil abounds.

An inevitable encounter, an undeniable attraction, and an unexpected chance at love-will it be enough?

"At first glance, no one would believe Elijah's tough guy exterior

hides a genuine and giving heart. But, you cannot help whom you


fall in love with and when opposites attract, the 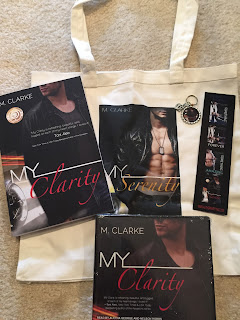 READ My Serenity Prologue and Chapter 1

Book Two (Follow-up to My Clarity)

“I’m on my way,” I said through the Bluetooth, already knowing who it was.
“You have the directions?”
“Of course I have the directions. I told you I was on my way.” I huffed a little. Elijah was like a brother to me, but sometimes he drove me nuts.
“Just checking, ‘cause last time you told me you were on your way, you lost the directions.”
He was right; the last time I forgot the directions at home. I had been helping my mom at the restaurant and didn’t want to drive back to get them. “I called you then,” I reminded. “I didn’t call you now. You called me. Stop being a nag and let me get to you. I’m hanging up.”
“How far are you?”
I was going to be about thirty minutes late, which was my fault because I hadn’t correctly estimated my time of arrival. “Okay—so I forgot about the traffic.”
“SETH!” I pulled back the phone. He was not happy with me. “I have to get to work soon. How far are you?”
“About twenty.” It was somewhat the truth. I hoped traffic would be on my side for the next several miles. If so, I would definitely make it.
“Okay, I can do that. Drive carefully.”
“I will, but would you relax? You’re not proposing today.”
“I am relaxed. I’m always relaxed, but not when you’re late.” Elijah was joking, but he tried not to sound like he was.
“Okay, okay. I’ll be there as soon as I can. The traffic is better now. See you soon.”
“Thanks. Bye.”
“I love you too,” I mumbled under my breath. I was just a little annoyed that in the first week I was back from Berkeley for summer vacation, my mom’s employees had quit. Not just one, but several of them, so I had to fill their shifts. I told her many times to hire more responsible people that needed a job, not just college students that left to go home during the summer.
Regardless, I was ecstatic for Elijah. He’d been through so much, but in the end, he’d finally found his happiness . . . Alex. He had also managed to get into grad school and get a paid internship. He was interested in the same field as Jimmy and me—financial banking. And I couldn’t believe he was going to propose to Alex. They had lived together for almost two years now in the same condo where they fell in love. Leave it to Elijah to be the romantic type. Even though he was known as the player, he knew how to treat women. I respected him for that, and for many other reasons. He also knew how to swoon them. I wasn’t very good at it though.
How fast time flew. I couldn’t believe I’d just finished the first year of my MBA at Berkeley. I had to turn down an internship with a promising business company to help my mom take care of both the restaurant and the auto shop, since my dad had passed away from a heart attack about three months ago. That was the hardest time of my life. Jimmy, Lexy, Elijah, and Alex had been there for me. I didn’t know what I would’ve done without them.
The sound of a loud horn snapped me out of my thoughts. I had to slam on my brakes hard and pray that I didn’t hit the car in front of me. Asshole! He almost made me crash into him when he cut so sharply in front of me. He freakin’ cut me off! Not having had a great day, I felt confrontational so I purposely tailgated the idiot. It was immature, but I couldn’t help the anger that coursed through me like a blazing fire. I’m not the angry type, but I was today—especially when he purposely slowed down afterward, even though he had a clear path to pick up speed.
Being blocked on both lanes, I couldn’t swerve to either side to pass the car. I was just about to change lanes when he shifted to the left. Then that bastard slowed down. This was the perfect opportunity to give him the finger. Elijah had mentioned before that God had created our middle fingers for moments like this, and I was going to use it.
When our cars were side by side, I turned my head to get a good look at the asshole—holy shit! It was a woman, and she was “take my breath away” gorgeous. My heart did a funny flip inside my chest and continued down to my stomach. And for some reason, my anger subsided. I hated to admit it, but pretty girls could do that to me.
My finger never lifted as I stared for a second, then turned back to see the road ahead of me. Getting into an accident, while gawking at a beautiful woman, was not a good idea. When her passenger’s side window started to roll down, I turned to her again. The wind tousled her long, wavy brunette hair. Her eyes grew wide while she bit her bottom lip. Maybe she thought I was cute? Maybe she wanted to get my number? Excitedly, I rolled down mine too. Before I could wave to apologize or give her my charming smile, she gave me the bird and shouted, “ASSHOLE!”
Nice! I just got burned. I didn’t know why I was so pissed off again, besides the fact that it was her fault in the first place, but I gave her one right back. Her level of beauty diminished right away with her dirty gestures, not to mention her bad temper. At least it would be the last time I’d ever see her. I was sure of it when she once again cut in front of me and sped away.

Mary Ting
Mary Ting resides in Southern California with her husband and two children. She enjoys oil painting and making jewelry. Writing her first novel, Crossroads Saga, happened by chance. It was a way to grieve the death of her beloved grandmother, and inspired by a dream she once had as a young girl. When she started reading new adult novels, she fell in love with the genre. It was the reason she had to write one-Something Great. Why the pen name, M Clarke? She tours with Magic Johnson Foundation to promote literacy and her children’s chapter book-No Bullies Allowed.